Set in the 15th-century Florence, the protagonist Cosimo the Elder who was elected head of the Florentine Republic in 1434. Cosimo has inherited the Bank of Medici from his father Giovanni, who has been mysteriously poisoned. Through various flashbacks (20 years prior), we are introduced to Florence at the time of Giovanni, and to his relationship with his sons Cosimo and Lorenzo. 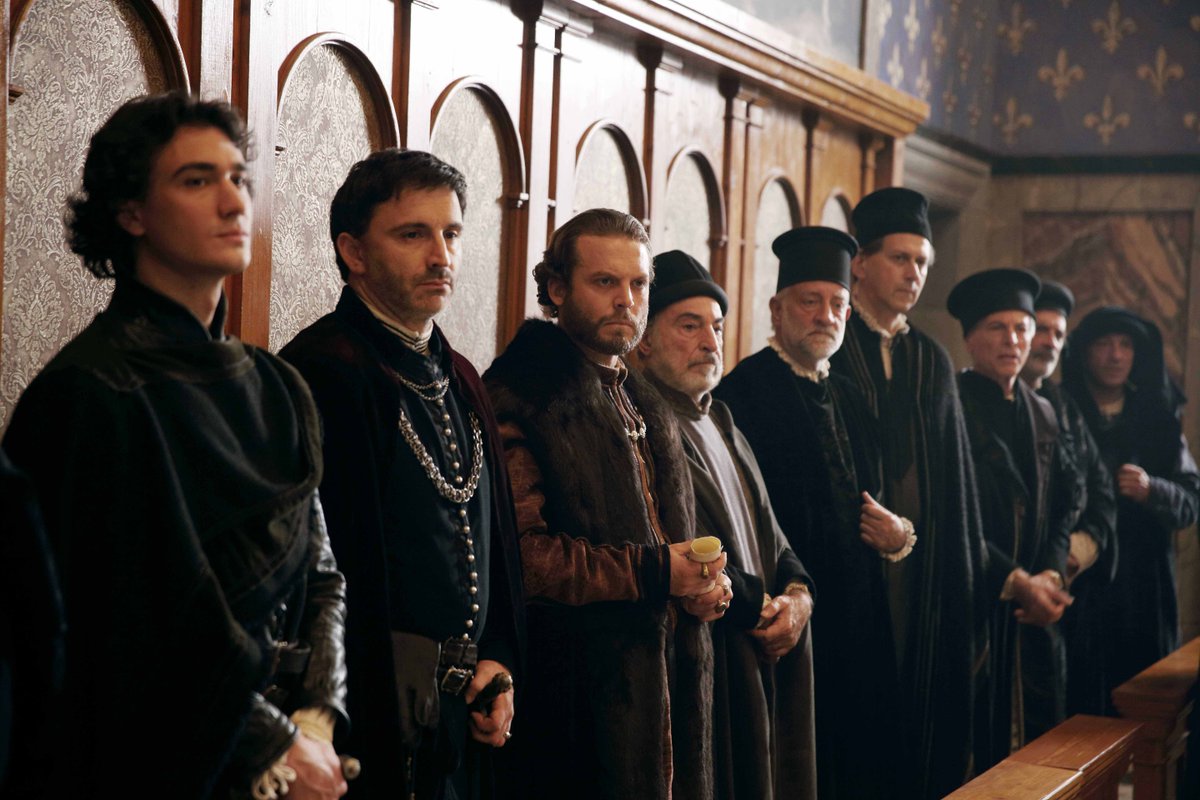 The republic was ruled by a council known as the Signoria of Florence. The Signoria’s nine members, the Priori, were chosen from the ranks of the guilds of the city: six of them from the major guilds, and two from the minor guilds.The ninth became the Gonfaloniere of Justice.

The republic had a checkered history of coups and counter-coups against various factions. The Medici faction gained governance of the city in 1434 under Cosimo de’ Medici.

Cosimo the Elder / Cosimo de’ Medici, Father of the Nation (1389-1464) was an Italian banker and politician, the first member of the Medici political dynasty that served as de facto rulers of Florence during much of the Italian Renaissance. Despite his influence, his power was not absolute; Florence’s legislative councils at times resisted his proposals throughout his life. His power derived from his wealth as a banker, and he was a great patron of learning, the arts and architecture.

The Albizzi family was a Florentine family originally based in Arezzo, who were rivals of the Medici and Alberti families. They were at the centre of Florentine oligarchy from 1382, in the reaction that followed the Ciompi revolt, to the rise of the Medici in 1434. The most infamous and influential members of the family were Maso and his son Rinaldo degli Albizzi (1370–1442) who countered the rise of Cosimo de’ Medici, exiling him in 1433. Luca, another son of Maso was head of the Florentine galleys; he was a loyal friend to Cosimo de’ Medici.

Donatello (1386-1466), was an Italian Renaissance sculptor from Florence.

Around 1430, Cosimo de’ Medici commissioned from Donatello the bronze David for the court of his Palazzo Medici. This is now Donatello’s most famous work, and the first known free-standing nude statue produced since antiquity.

Filippo Brunelleschi (1377-1446) was an Italian designer and a key figure in architecture, recognised to be the first modern engineer, planner and sole construction supervisor. He  is generally well known for developing a technique for linear perspective in art and for building the dome of the Florence Cathedral.

Pope Eugene IV (1383-1447) was Pope (1431-1447). He was crowned at St. Peter’s Basilica on 11 March 1431. Upon assuming the papal chair, Eugene IV took violent measures against the numerous Colonna relatives of his predecessor Martin V, who had rewarded them with castles and lands. This involved him in a serious contest with the Colonna Family that nominally supported the local rights of Rome against the interests of the Papacy.

The Republic of Venice (697–1797) was a sovereign state and maritime republic in northeastern Italy. It was based in the lagoon communities of the historically prosperous city of Venice, and was a leading European economic and trading power during the Middle Ages and the Renaissance.

The republic was ruled by the Doge, The Doge of Venice, who was elected by members of the Great Council of Venice, the city-state’s parliament. The ruling class was an oligarchy of merchants and aristocrats. Venice and other Italian maritime republics played a key role in fostering capitalism.